Picton is the entry and exit point for the majority of land travel tourists going to and from South Island destinations (c. 1.2 million). It is also the entry point for the ever-growing number of Marlborough Sounds’ temporary and permanent residents. It is therefore the portal to the South Island. It is also the first port of call for those limiting their South Island travel to the Marlborough region. The region’s administrative centre is Blenheim.

After Blenheim, population 28,200+, Picton is the largest settlement in the region and the one most “connected” to the region’s marine and maritime history, as opposed to the intensive viticultural and pastoral environment of the other centres , Blenheim, Renwick and Seddon. Its resident population is about 4,000 with a further 3,200 + Marlborough Sounds residents.

From Waitohi to Picton

The Establishment of Picton

Picton is on the site of the Te Āti Awa settlement of Waitohi. In 1828 the Ngatiawa tribe (Te Atiawa Iwi), from Taranaki took Totaranui (Queen Charlotte Sound) by conquest. Ropoama Te One, a paramount chief of the Ngatiawa, established himself at Waitohi and later negotiated the sale of the pa site.

The name Waitohi means wai, or water, and tohi – the tohi ritual, in which the tohunga dipped karamu branches in the sacred stream, in this case the Waitohi stream, and brushed the right shoulder of warriors before battle.

Negotiations for the Waitohi pa site, as land for the future town of Picton, stretched from December 1848 through to the final deed of sale signed 4th March 1850 at Nelson. Waitohi was bought from Te Āti Awa by Sir George Grey and Sir Francis Dillon, the New Zealand Company agent.

Chief Ropoama Manuhiri (resident in Waitohi), and other chiefs agreed in a new Deed to vacate pa at Waitohi, sell Waitohi to the settlers. The Deed included port and cultivations and all of the land at Waitohi in exchange for land at Waikawa where Te Ati Awa, reluctantly, moved.

The establishment of the Town of Picton, formerly called Waitohi, was gazetted in        October 1859.

Picton was named after Sir Thomas Picton, a British Army general and supposed hero of the Battle of Waterloo. Sir Thomas never came to Picton,  nor had any links with it,          but this way of naming places was typical of colonial times.

Picton was the capital of Marlborough until 1865. 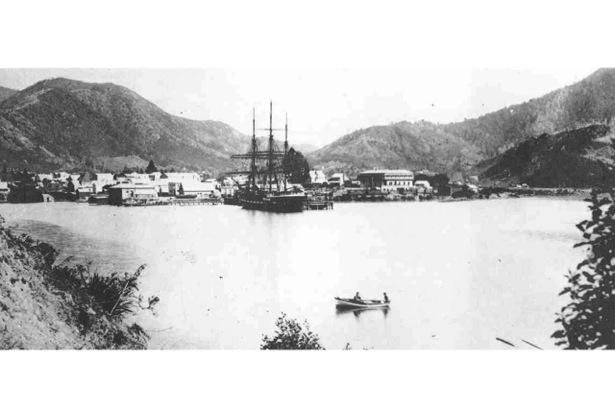 Thomas Picton was born in 1758 in Wales and became a life-long soldier. He fought in the American War of Independence, in the West Indies and in 1801 became the Governor of Trinidad. He was thanked seven times by the English Parliament for bravery in the Peninsular War  in Spain, and knighted for his services in the army. He conducted the siege of Badajoz in Spain, where many lives were lost. The Duke of Wellington, after whom Wellington is named, and who later was responsible for defeating Napoleon Bonaparte in the battle of Waterloo, wanted Sir Thomas Picton to join his forces. He considered him to be ‘a rough-mouthed devil’ but had confidence in his ability as a soldier and leader, and in 1815 gave him a high command in his army after Napoleon returned from Elba.

Seriously hurt two days before in an earlier battle, Sir Thomas kept his wounds secret because he wanted to fight at Waterloo against Napoleon. Sir Thomas Picton’s uniform did not arrive in time for the battle so it is said that he fought in civilian clothes and a top hat. He was killed by a shot through the temple from a musket ball while leading his brigade to the charge. It is reported that the Duke of Wellington was moved to tears by the carnage on the battlefield and the number of men who had been killed.

Picton is not the only town named after Sir Thomas Picton, there is also a Picton in New South Wales, Australia, and one in Canada.